The real meaning of Hapkido comes from Hap (united, coordinated) Ki (energy) Do (way or art) so the most rational way to translate it is: “ the ways of unifying energy or coordinating energy or harmonious energy).
Hapkido (also spelled as Hap ki do) it is a highly realistic combative Korean martial art, is one of the powerful self-defense system in the world that employs strikes, kicks, joint manipulations, throws and ground control techniques. Also there is the use of traditional weapons, including short sticks, long sticks, rope, knife, and cane, in addition Hapkido contains both long- and close-range self-defense techniques, utilizing various jumping kicks and hand strikes, at longer range distances, and joint locks, small strikes and throws at closer fighting distances.

Hapkido emphasizes circular motion, redirection of force, and control of the opponent energy. Also, Hapkido practitioners seek to gain balance by taking advantage through footwork and body positioning, this way it incorporates the use of leverage, avoiding the use of strength against strength. It is like soft overcome the hard!

Initially Hapkido adapted a technical part from Yawara/ Daitorye Aikijujitsu which Hapkido founder Ji Han-Jae had learned from Choi Yong-Sool. Later, this system also was combined with kicking and striking techniques from Tae Gi and throwing techniques from Judo and low sweep kick from Kungfu.

In 1949, Ji began his martial arts training under the direction of Choi-Yong-Sool until 1956 when he moved to Seoul. Ji Han-Jae also have trained in the ancient methods of the Korean martial arts, known as Sam Rang Do Tae Gi by a man named Taoist Lee, and then he was initiated to meditation techniques and his knowledge by Hahlmohni (grandma) where he was guided on how to develop the open avenues of intuitional knowledge that makes the mind calm and steady and awakens an ecstatic feeling through clarification of ideas needed to develop a strong mind in martial arts, however, the real names of these two remarkable teachers are unknown due to Korean’s ethical culture, Ji never asked them for their names. Taoist Lee taught the use of the Korean long staff “Jang-Bong and the unique kicks of Sam Rang Do Tae Gi (Taegiryon).

Ji Han-Jae was undoubtedly the prime pioneer in the art of Korean Hapkido. Due to his physical abilities, technical contributions, promotional efforts and political connections Ji became the head Hapkido instructor of the presidential elite group of body guards under Korean President Park Jeong-Hee, it was then when Hapkido became popularized, first within Korea and then internationally.

As a teacher of Hapkido, Ji incorporated traditional Korean kicking techniques from Sam Rang Do Tae Gi (a part of Chehsool) and striking techniques into the system and gave the resulting synthesis the name of Hapkido in 1957. Although some martial arts share similar fundamentals due to their influence by upper generation such as Choi Yong-Sool, Hapkido is unique by essence.

Because a founding member of the Dae Han Ki Do Hwe (Korea Kido Association) in 1963 with Choi Yong-Sool as titular Chairman and Kim Jeong-Yoon as Secretary General and Head Instructor for the association, Ji found himself not able to exert as much control over the organization as he anticipated. To this end and with the support of the Head of the Security Forces, Park Jong-Kyu, Ji founded the very successful (Dae Han Hapkido Hyub Hwe) in 1965.

In 1984, when Ji moved first to Germany and then to the Unite states, it was when Ji founded Sinmoo Hapkido that incorporates philosophical tenets, a specific series of techniques, meditation techniques and healing techniques into the art. Ji can be seen in the films Lady Kungfu (Hapkido) and Game of death in which he takes part in a fight scene against Bruce Lee.

Ji met Bruce Lee who was introduced by Jhoon Rhee at Andrews air force base. Bruce became a good friend of Ji and started training together, and that was how Bruce had a chance to learn the art of Hapkido by Ji, later Bruce invited Ji to get involved into the Hong Kong movie industry. 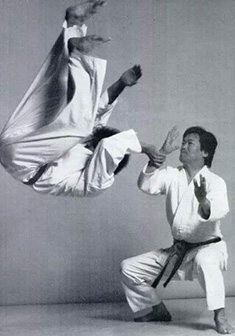